The first 3 broadband stations began to be installed by the end of 2001, and consisted of a REFTEK digital recorders (DAS 72A), tri-axial Geotech sensors (Model KS-2000) and GPS time systems. The recorders stored the signals in 4GB SCSI disks with a resolution of 24 bits. The digital information, sampled at 100 samples per second (sps), was transmitted to the RESNOM data center via Radio and Internet links. These equipment stopped working in mid-2011.

After the M7.2 El Major-Cucapah earthquake, of April 4, 2010, economic resources were obtained by CONACYT through the Government of Baja California. These funds were used for the network expansion and renovation of the seismological stations through the acquisition of equipment for 14 modern seismic stations. These stations were installed during 2011 and 2012. Nowadays RESNOM has 24 broadband stations, 10 of them are integrated by a tri-axial sensor Guralp 3ESPC, and a tri-axial accelerometer Kinemetrics Episensor FBA ES-T. Signals from these sensors are digitized at 100 sps using 6-channel digitizers Reftek 130, which have 24-bit resolution. Thirteen stations are integrated by a Trillium Compact 120-s broadband seismometer, a tri-axial accelerometer Kinemetrics Episensor FBA ES-T and a Reftek 130-S digitizer. One station has a Guralp CM-40T sensor and the signal is digitized at 100 sps and a 3-channel DAS Reftek 72A digitizer. Time control is done by a GPS system.

Digitized signals are transmitted in real-time using conventional and satellite Internet. In the RESNOM data center the signals are received and automatically processed for the detection and location of earthquakes, and calculation of their magnitudes. Seismic raw signals are stored in continuous way and processed signals are incorporated into a database.

Short period stations operated from 1978 to June 2013. The stations were equipped with 12-bit analogue-to-digital converters, designed and built at the Department of Seismology of CICESE during 1978 to 1979. These stations consisted of three Teledyne Geotech (S-500) or Mark L-4C seismometers to detect the seismic signal in the North-South, East-West and Vertical directions. The detected signals were digitized in-situ at 40 samples per second (sps), and were transmitted in real time, via VHF and UHF radios to the processing center at Department of Seismology of CICESE.The signals were decoded and stored on a computer, and then the event detection processes and preliminary seismic information processing were done. At the same time, the information of some stations was converted to analog format to be plotted on paper by means of helicorders, with the purposes of exhibition and immediate inspection of the signals.

At the beginning of 1993, was installed a long-period station in the basement of the Earth Sciences building and was incorporated into the RESNOM network. The station consisted of three Teledyne Geotech seismometers (Models 7505 and 8700) connected to an in-house design of digital acquisition system. This system detects the signals at one sps per channel, using a 12-bit analogue-to-digital converter. The resulting information is converted into an RS-232 format to be supplied to a computer for the processing, analysis and interpretation. 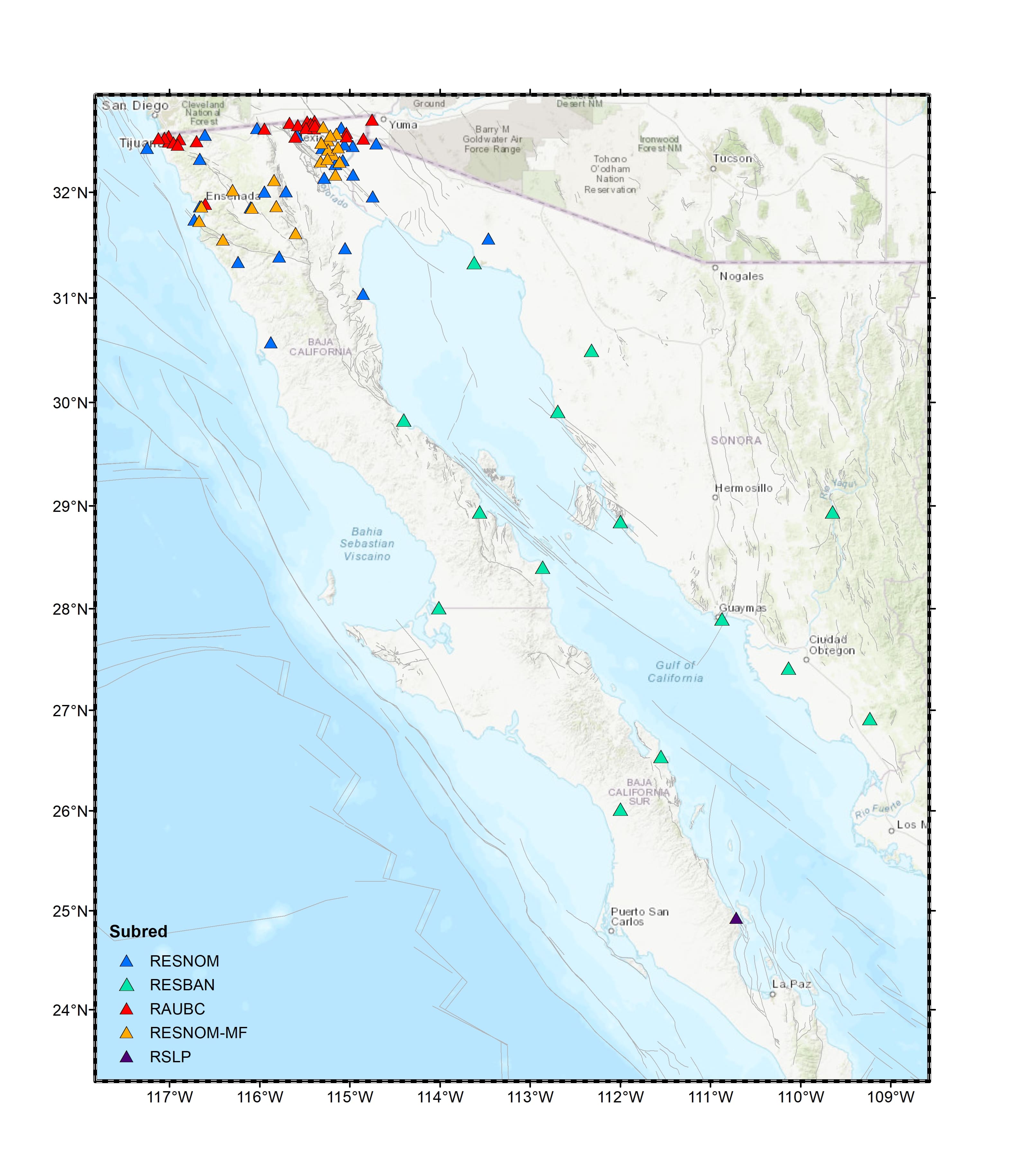